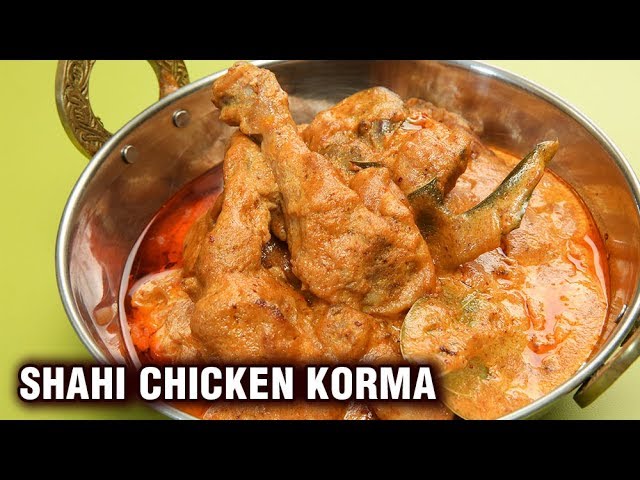 Shahi Chicken Korma – A “royal” Mughlai dish made with chicken cooked in a creamy spicy sauce and garnished with golden fried nuts and raisins that add subtle sweetness to the curry.

Traditionally made in a white sauce and garnished with a super thin silver sheet known as “vark” was cooked in the Mughal kitchen to serve to the emperors.
Watch our video to Learn how to make Royal Mughlai recipe Shahi Chicken Korma at home, and don’t forget to share your feedback in the comments section below.
Do watch the video to know more about Royal Mughlai recipe Shahi Chicken Korma! Don’t forget to Like, Share, Comment, Subscribe and press the bell icon for instant updates

Method: Let’s start with marinating Chicken for which have Chicken in the Bowl then add Curd, Red Chilli Powder, Salt (as per the taste). Next, heat up the Oil in Wok then add Onion (sliced), Salt now saute it till the Onion is in golden brown color. Next take the Onion out in the bowl, and now fry the Chicken for which add Oil in the Wok with Ghee. Once the Ghee & Oil both heat up then add the Marinating Chicken. Next stir the chicken on high flame till the chicken is half done. In the Mean time let’s make the Korma Paste for which add Fried Onions, Almonds (soaked & peeled), Curd, Ginger & Garlic, Royal Cumin Seeds. Next, grind this without water initially then add Water and grind it in smooth paste. Next, add Cinnamon stick into the frying chicken with Green Cardamom, Cloves, Bay Leaf then fry it for a minute then add in Korma Paste with some Water & Salt and cook it for 20 minutes with lid closed. Now, your Shahi Chicken Korma is ready to serve.